I am very excited! After 11 or so years of working in our current office, we are moving (Lord willing) by the end of next week into a building with a newly renovated office! Today as freight train after freight train passed and blasted their horn, I said to myself, “One more week of this!” I will not miss them. They seem to know when I will be on the phone and it probably happened 8 times today. I feel sorry for the person on the other end of the line. Our phones are extra sensitive to noise and it sounds like the train is coming through the phone.

So what do freight trains have to do with office cooking. Nothing, really. Except that in the new office we will have a full kitchen whereas right now there is a very small refrigerator, a microwave and a coffee pot. And a George Foreman grill that I’ve been enjoying the last while.

I’ve discovered that I can have delicious roasted hot dogs in a matter of minutes. 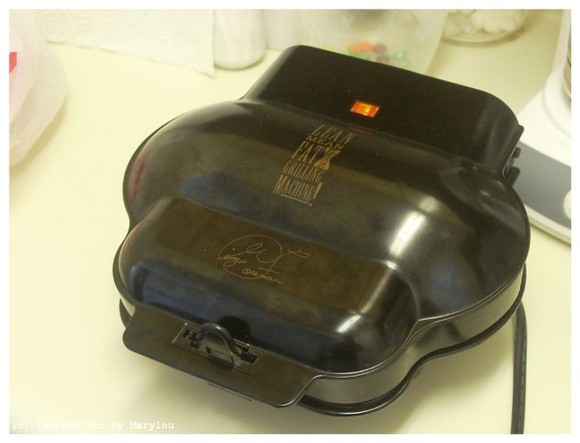 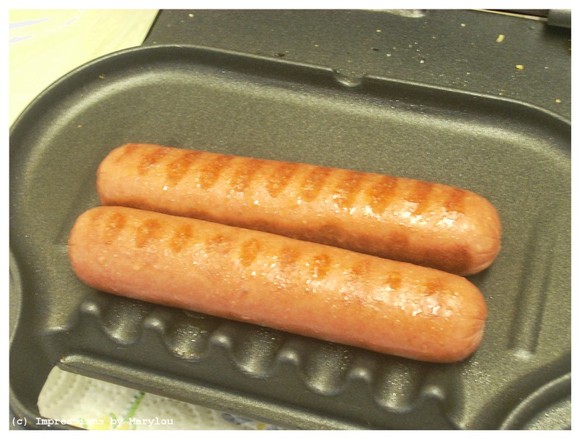 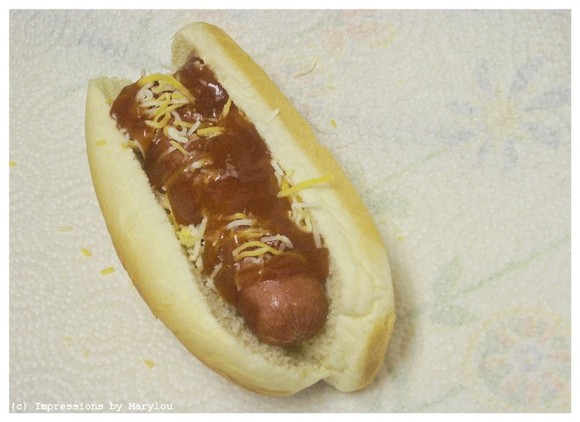 And while I will be delighted to move into a bigger office and have a full kitchen complete with hot water, I will miss some aspects of our current office. The location where we’re at is ideal (minus the train noise). I’m a few blocks from the post office, and there is a fair amount of traffic that I can watch.

Our new office will be by a 4-lane highway and back a little further from the road. I will have 5 minutes to work instead of 10 so I will have time to run home over lunch break if I want. And I’ll be about 3 minutes from a park that has a walking track so I shall have no excuse to not get some excercise on my lunch break, especially once the weather stays cool. Anybody wanna come walk with me?

And in case you’re wondering, that new header photo ain’t from around here. I was gone this past week. And I took a few pictures.

“Few” being slightly under-exaggerated. What’s the opposite of hyperbole?

Internet access. The DSL kind. Lite though it may be it will be most welcome. We’ve been using a wireless card from Alltel and that service was pretty expensive, especially for no better tower coverage than we have at our house.

The wireless card finally quit working this summer and since AT&T has been telling us that it is coming our direction, we decided to cancel the service until we can get DSL. We could even see them burying the cables, but it seemed like it would. never. get. here.

Many sighs have been uttered in our home. My sister has uttered threatenings and slaughterings to her computer, but I try to convince her it’s not the computer’s fault.

Friday, I checked online to see if we had access at our number and what delight passed from my lips when I discovered that we do have it available!!! My boss’ wife was afraid her 2-year-old daughter had gotten into something and that I was freaking out over that. Nope, they were joyous sounds!

I’m still kind of holding my breath until it is actually up and working after this weekend when it is supposed to be activated. I should be able to update a little more often and get some things checkmarked off my list. One being possibly a move to WordPress (?). Anyone have any opinions as to why I should or shouldn’t?

I had the seniors from church over recently for supper and we got to talking internet access. They ALL have DSL at their homes but barely know how to use their computers. Here I sit, with no access at all. We had to chuckle over that one.

We got a very nice rain from TS Lee and cooler, nearly-fall weather with it!! We went walking last night and almost didn’t break a sweat. The sunset was gorgeous. While we were walking it was bright gold against clear blue skies. By the time I got home where my camera was, it was turning red. 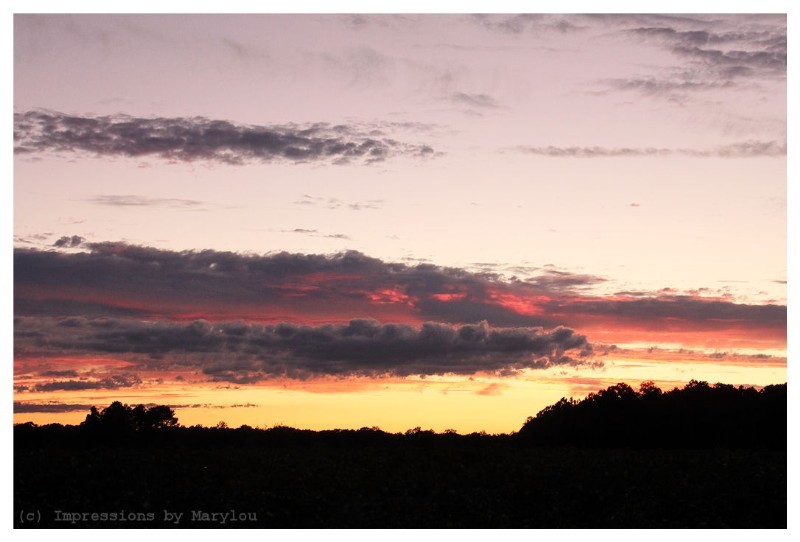 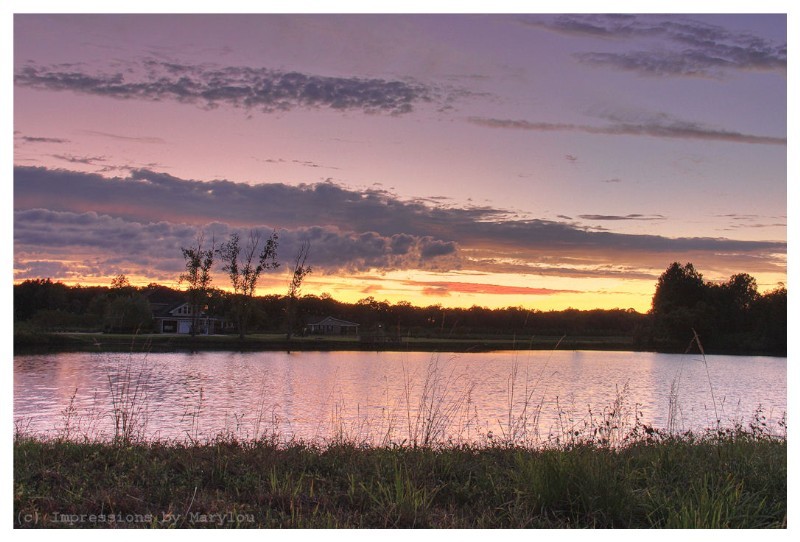 This still doesn’t capture the beauty! And this morning the weather is deliciously cool! Thank you, Lord!! This is the easiest way I know of to make delicious pulled pork barbecue. I used to have access to a charcoal smoker and then I would smoke them for a few hours and then finish them in a crockpot. For these I found a recipe that I adapted that would be delicious smoked but is delicious even without the hassle of smoking.

I know you’ve seen bottles of butt rub and yes, some guy must’ve come up with that name! I start with 1 (or 10 in one case) bone-in Boston butt. Now where did they get those names? Not sure. When we were in Boston in the fall, I don’t recall seeing any porkers around. And then why the butt? It’s a shoulder portion.

This rub is easy to make and really adds a lot of flavor! The key ingredient that you shouldn’t substitute is the smoked paprika. Unless you have hickory smoked salt and regular paprika and combine those to replace it. We grew up eating tomato sandwiches with a little McNess hickory smoked salt sprinkled on them. That’s still my favorite way of eating tomatoes. 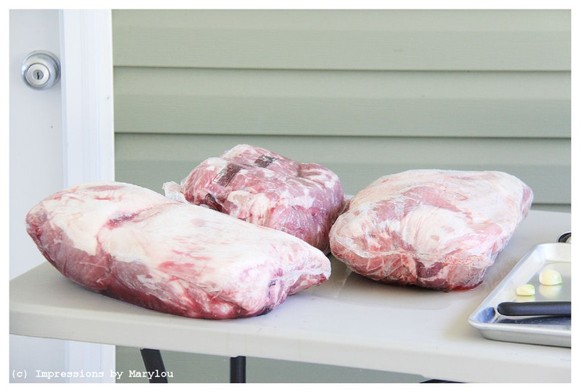 The rub ingredients are: 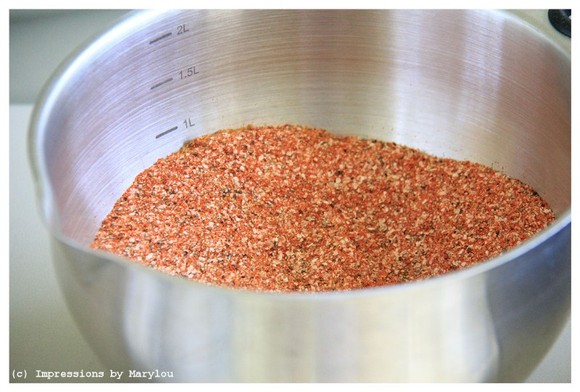 Rub this into the roast. Let set for at least 10 minutes. If you’re going to grill the roast then drizzle a little oil over it and rub in. If you’re going to pan fry it, then put a bit of oil into a frying pan. You need to seer each side of the roast to seal in the juices. I tried the grilled one time and didn’t think it really made much difference in the taste so unless you’re doing more than 2 it’s easier just to seer it in a pan for 3-4 minutes on all sides. 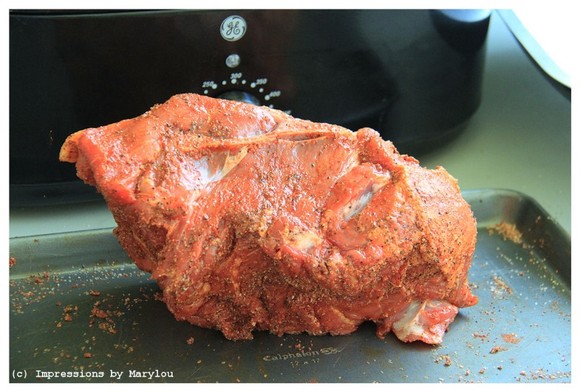 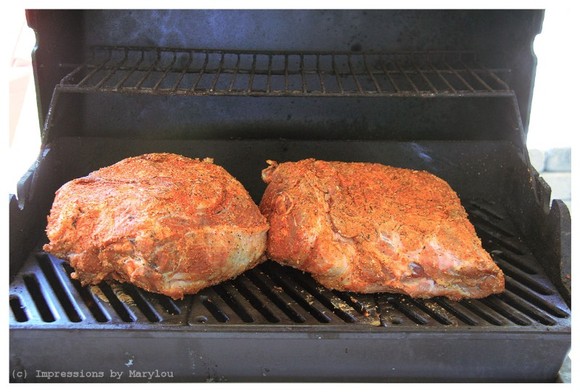 In your crockpot or roasting pan, pour 2 cups beef broth, 1 cup barbecue sauce and 1 large garlic clove (minced). The roast will be slow baked at 300 for 6-7 hours so either the oven, a crockpot or electric roaster work well. Two roasts will pretty much fill up a roaster. Resist the urge to lift the lid once it’s cooking. After about 3 hours, flip the roast. When the meat is pulling away from bone it’s finished. It should fall apart when you try to lift it out. If you don’t cook it long enough, it’s hard to shred it and the fat hangs onto the meat. 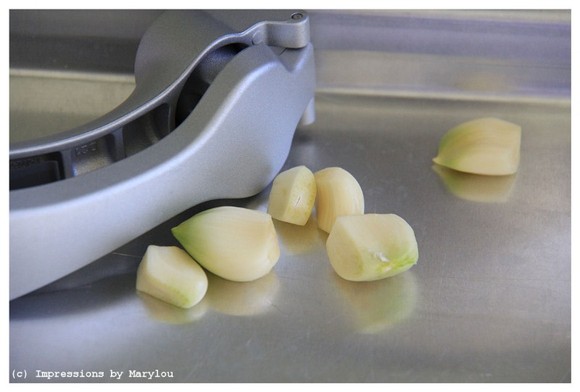 If it’s falling apart, put it into a pan and let it cool for a few minutes. Then take two forks and work at shredding it. This makes it fairly easy to weed out the fat. I just really do not biting down into fat! Yick! 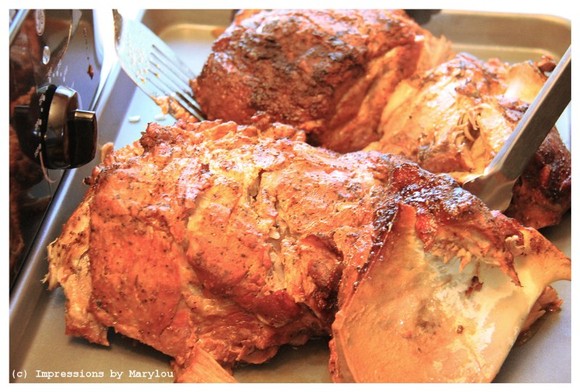 Let the juice that the roast was cooking in cool and then pour at least 3 cups into a bowl. Let the fat come to the top so you can skim it off. Or if you have one of those cool measuring cups made for pouring off the bottom of the cup. Or if you have a baster you could suck the juice off the bottom of the pan. Either way you do it, pour the juice over shredded meat and serve. Or it can be heated and served later. Plus I think it’s better later because it sits in the rich juice for a while. I made 10 roasts a month or so ago for friends of ours take to their family reunion. Then last week I made it for a supper for our company. One 8-9 lb. roast will serve 14. It goes great with baked beans, mac & cheese, coleslaw & cornbread.

If you prefer beef over pork, use a boneless chuck roast and use the same rub and bake for 4-5 hours. 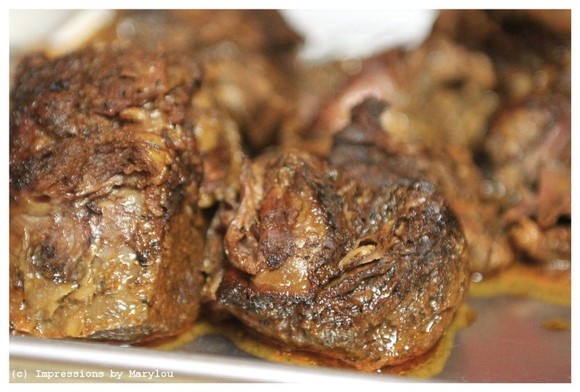 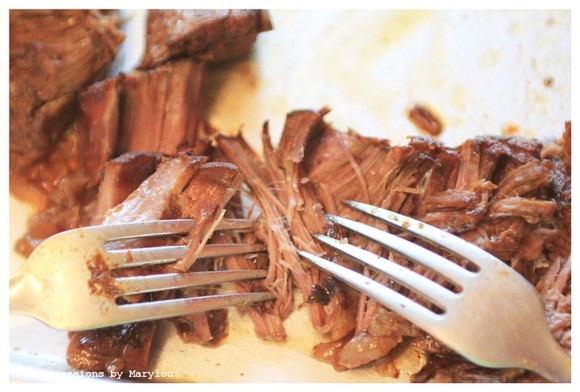 I like to make my own sauces too. Here are two of the three recipes that I used. The third one is top secret. So secret I don’t even know it. So I come up with a new one each time. 🙂 It’s a fairly traditional sweet & spicy dark sauce.

Different regions of the US make their sauces different. I decided to try making a Carolina-style which is mustard based. I still am not a big fan but so far others have really liked it. I’m just not a huge mustard fan.

Mix all ingredients except soy sauce, butter and smoke. Simmer 30 minutes. Stir in remaining ingredients and simmer for 10 more minutes. Makes about 2 ¼ cups.

Simmer all ingredients for about 30 minutes. Makes nearly 3 cups.

I have quite a bit of this sauce in fridge right now so I want to try baking wings or drumettes in it.