It’s time to take the camera out again. Haven’t done much of that this summer although I did do some engagement pictures last weekend.

Here are 3 shots from the last summer or two that I had fun reworking in HDR. High Dynamic Range is a process that involves using software to combine mulitple images that have different exposures. Digital camera sensors can’t properly capture a scene when there are big contrast in lighting. So you take several shots of the same scene, taking several underexposed (or dark) to overexposed (bright). The software combines the images and you can keep them fairly realistic looking 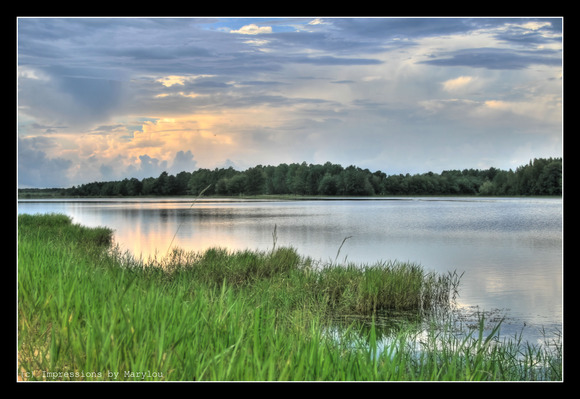 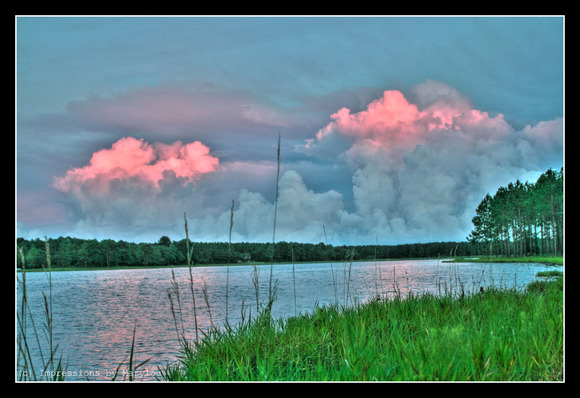 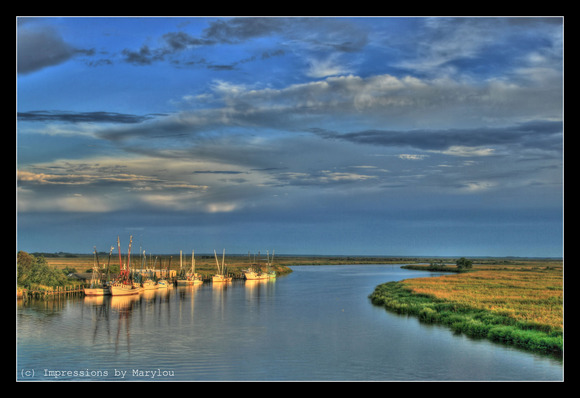 Kiss the summer goodbye, we are nearly at the fall season. Looks like September will be fuller than I thought.

Here’s to the end (nearly) of a busy summer. It’s been a busy one and I’m anticipating a slightly slower pace soon. So… drop by and have some cappucino with me. 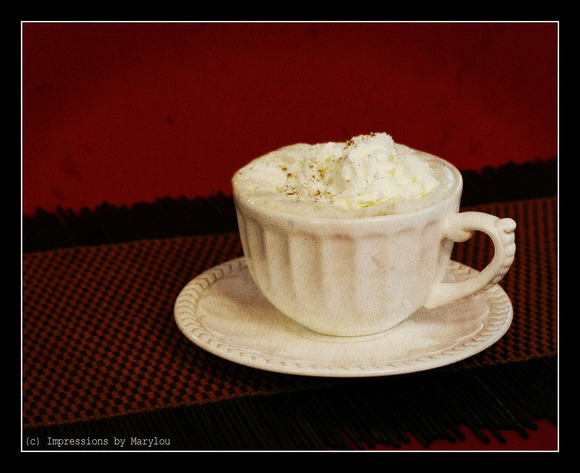 Or iced coffee. Been drinking a lot of that recently, thanks to a delicious recipe from Jairia & Donna.

EDIT: I tried slowing the slideshow down. See if that helps.

EDIT #2: I give up. It think it’s slower but now it’s stacking them different and it’s not supposed to. Arrgggh!!

Having some difficulties with this slide show so I hope it shows up. There are some captions but like I said it was giving me problems so I quit.
We had a lovely weekend in SC last weekend with my dad’s family. It’s been about 6 years since we had a reunion and it’s amazing how the great-grandkids have grown in age and number since then. I have a photo of the great grands from about 16 years ago. There were 30+ kids age 5 and under. Now they are between 16 and 21 years old. Needless to say, I had an interesting time placing them (and the other 50 +/- who have been born since then). One afternoon we grouped in families so we could see who belonged to which family.
This family has a great sense of dry humor that spans the generation and includes the in-laws. I was thinking I should take notes so I could remember some of them but can’t remember many.
We spent some time remembering our grandparents, Joe & Sadie, who have been gone for a number of years. Grandpa was a man of wisdom and the only thing that seemed to get him riled was working his cattle. Grandma was lovely lady who had enough Miller blood in her to keep her conversation interesting! Many of the grandchildren grew up in the same neighborhood as them and have memories of day-to-day life. We out-of-state family have memories involving being guests at their home, as well as their home being the place where the action was when the family got together.
It was very warm so we were extra thankful for the A/C in the gym. Special thanks to those who live in that area and hosted the rest of us! We had a great time!! 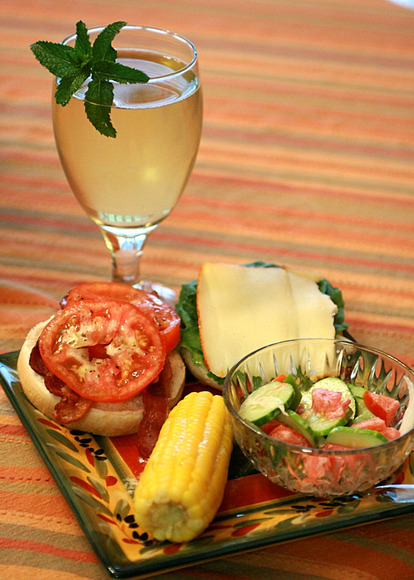 And thanks for the suggestions for cracker recipes. You gave enough to have those crackers disappear in short order!!

Want a way of keeping the kitchen cool in the summer? How about making supper on the grill instead. I did that last night. We had a few veggies to use up so I decided to pull out a steak to go with it. A local grocery store runs specials on their ribeyes so we occasionally splurge. 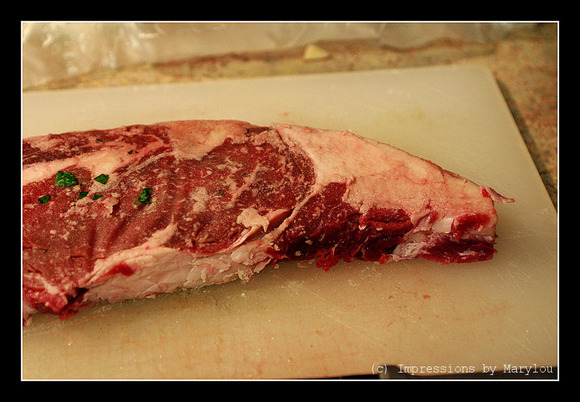 The only thing is, sometimes they aren’t all the special. Not bad tasting, just not as good as a ribeye should be. So we found a way that works for us. They were cut as 1″ steaks but I cut off the bone and the biggest chunks of fat and then pound them until their about 1/3 inch thick. 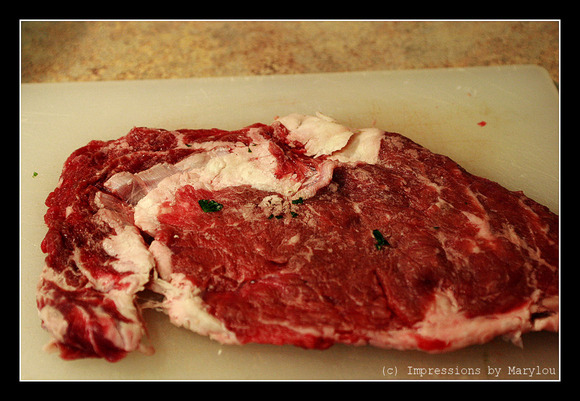 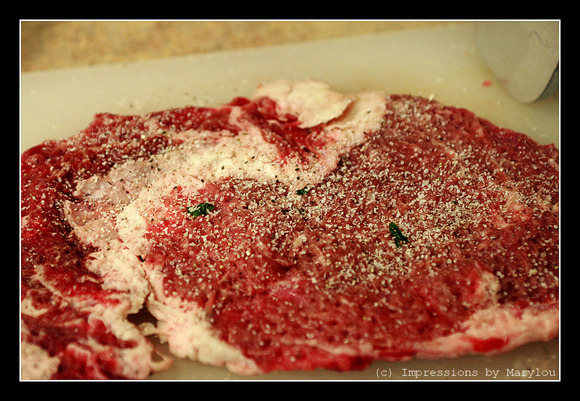 This seasoning is great and I’ve started using it alot. No need to buy Nature’s Seasons anymore.

Next, I cubed some new red pototoes in 1/2 inch cubes. On a double layer of aluminum foil (didn’t have the heavy duty stuff), I poured a little olive oil and House Seasoning. 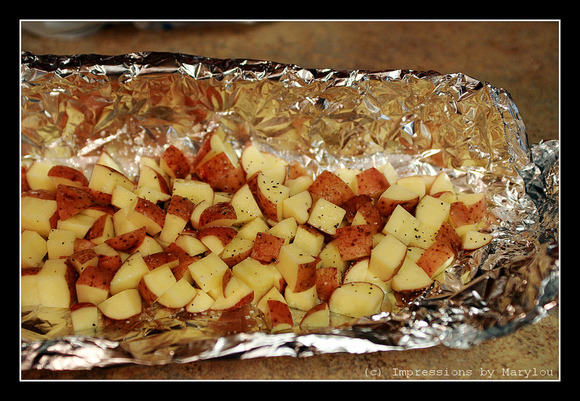 Added the potatoes and drizzled a little more olive oil and sprinkle some more house seasoning. Later I wished I had addes some chives or other fresh herbs. 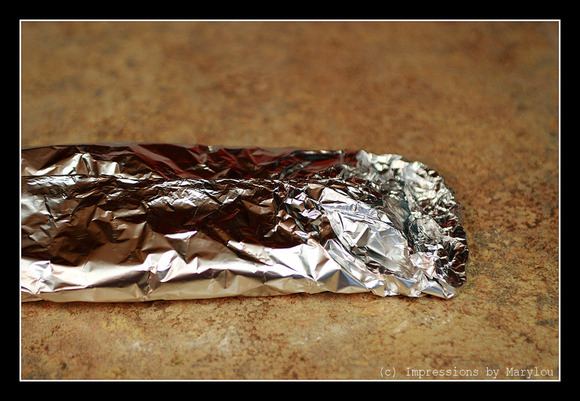 Bring sides together and crimp at top and on ends. I put this on the grill as I was getting the rest ready to go.

In a marinating container, I poured some more olive oil and House Seasoning. I dumped the asparagus spears in and tossed to mix. 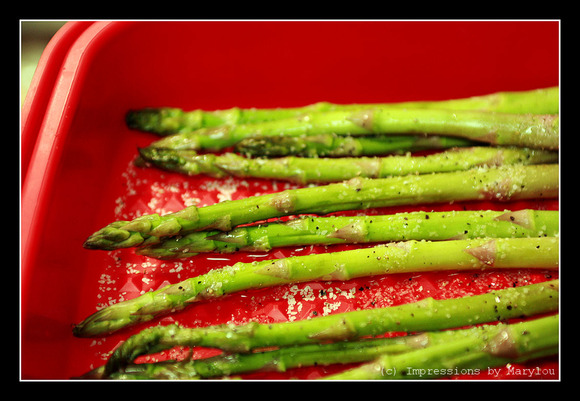 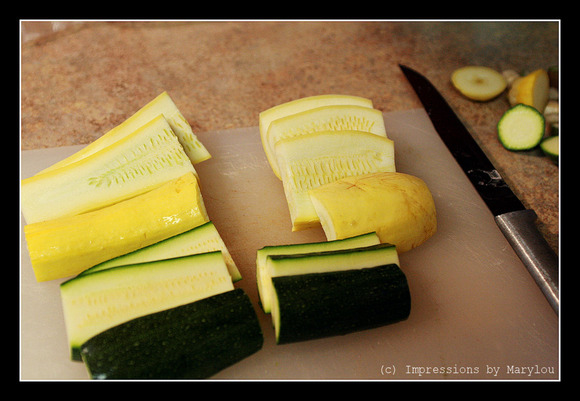 We had some zuchini and yellow squash from Velma’s garden so I sliced them into 1/3 inch slices. 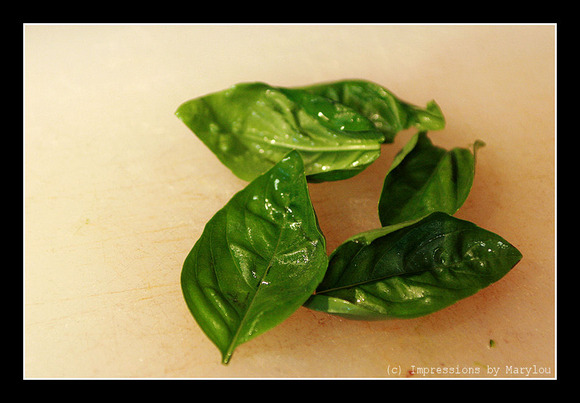 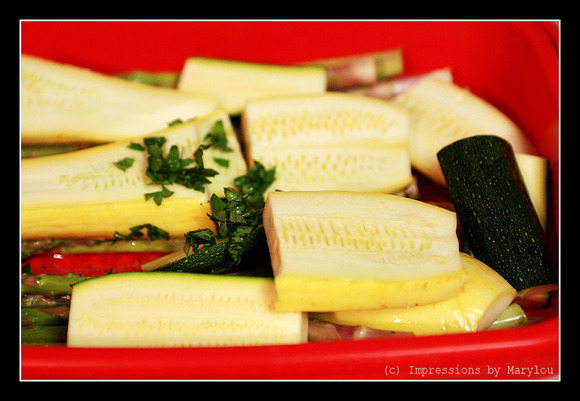 added the squash and basil to the asparagus 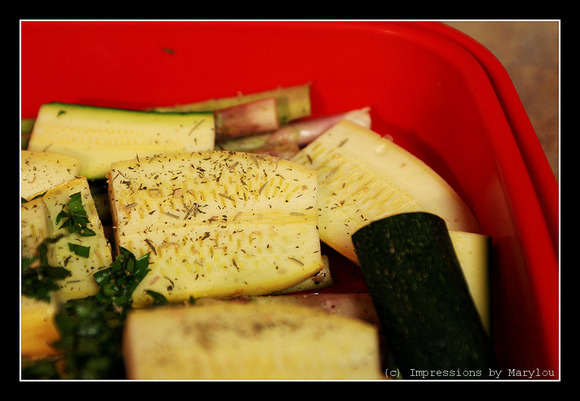 added some seasonings made to add to olive oil for a dipping sauce, and tossed it altogether. 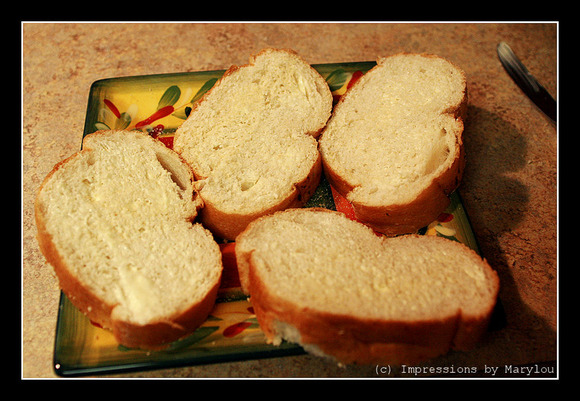 Spread the Italian bread with butter, salt & garlic powder. By this time (30 min. or so) the taters were done so pulled them off the grill 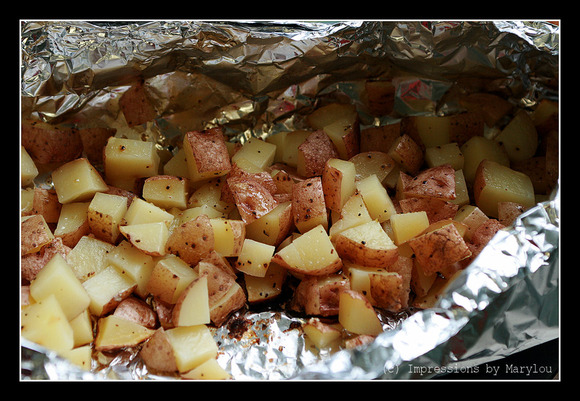 and added the aspargus. The squash worked nicely on this thingie that was leftover from the fish supper. Makes it easy to turn them without them falling through the slats. 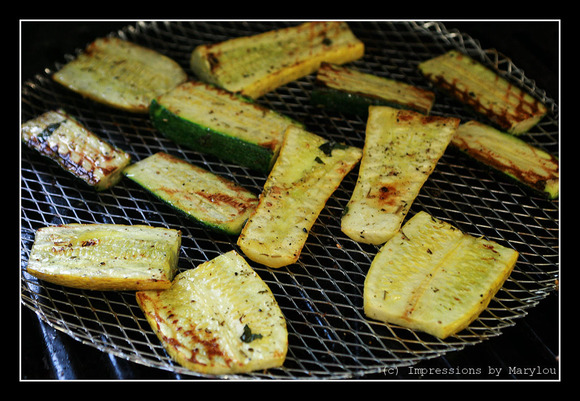 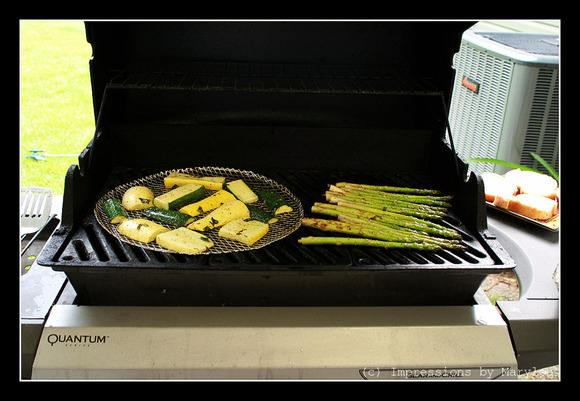 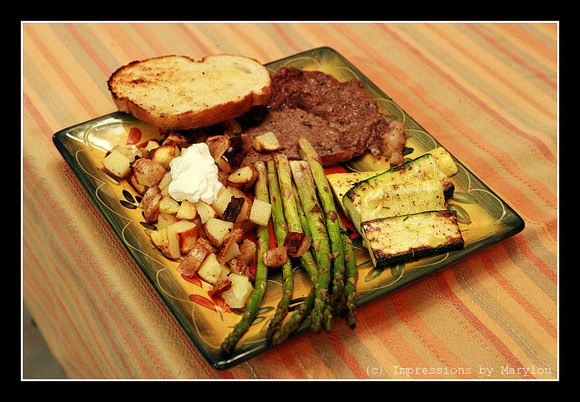 And voila! It’s ready to eat. And your kitchen is still cool and if it’s anything like mine, really messy.

This is probaby a meal geared toward adults. Sorry, haven’t figured out how to grill mac & cheese yet!!

– I am interesting in purchasing a rotary fabric cutter and mat. Anyone have a brand to recommend or to un-recommend? It would only be getting a light amount of use.

– We have lots of saltine crackers at our house leftover from a supper where not many got eaten. Do you have a recipe to share so I can use some of them up. Excluding squash casserole recipes. I like it but my sis doesn’t particularly care for it.

– I love instrumental music that combines classical music pieces with hymns (ie: Canon in D and A Mighty Fortress is Our God).  I have a cd or two but wouldn’t be opposed to having more. Any suggestions for me?